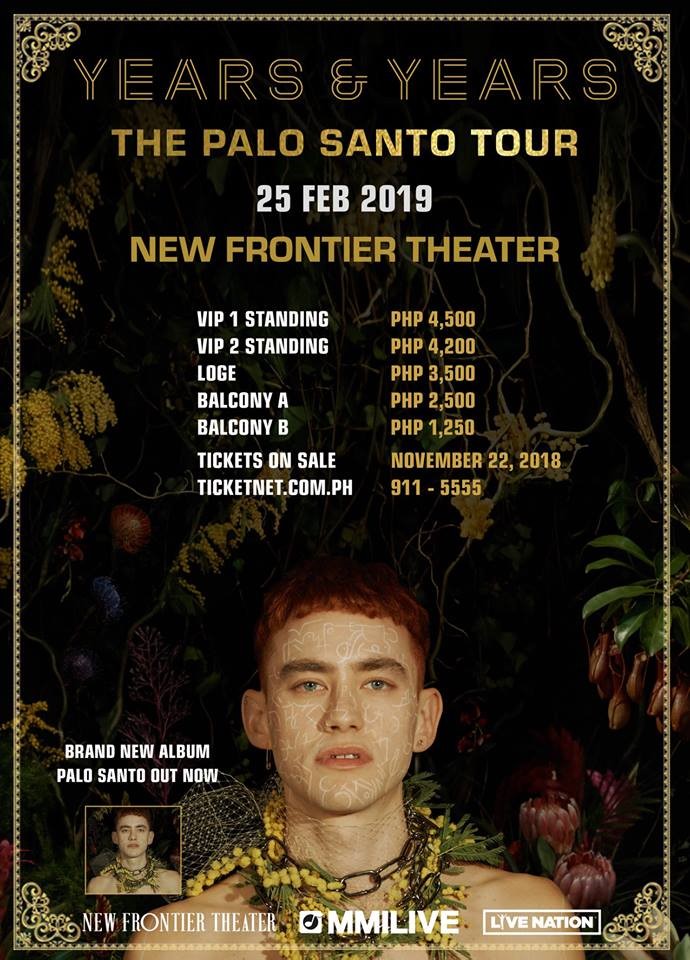 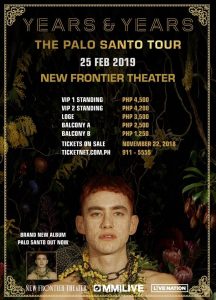 British electro-pop trio Years & Years will take over the Manila stage as concert promoters MMI Live and Live Nation confirmed that the band will be performing at the New Frontier Theater  (formerly Kia Theatre) on February 25, 2019.

Led by front man Olly Alexander, Years & Years was created in 2010 and released their chart-topping debut album “Communion” in 2015. Proof of the band’s success, this album ranked first in the United Kingdom the week of its release and 60,000 samples were sold. Touted as the fastest-selling debut album in 2015 from a UK band, the album produced the hits “King,” “Eyes Shut,” and “Shine.”

Three years later, Years & Years is back with the release of “Palo Santo”. Palo Santo is a whole new universe created from the imagination of vocalist Olly Alexander and he said ‘Where can I be my freest self, not tied to a gender or sexuality. I’ll just create my own world where those things don’t exist, where anybody can be any gender and sexuality that they like.’ He also revealed that Palo Santo, in videos, narratives online and off, finally climaxing in every sense of the word onstage in the all new Years and Years show.  Debuted in the top three of the UK Album chart, energetic dance-pop beats from the new album includes “Sanctify,” “If You’re Over Me,” “All For You” and “Karma.”

Years & Years is an electro-pop trio made up of vocalist Olly Alexander, bassist Mikey Goldsworthy & Emre Turkmen on keyboards. In celebration of Years & Years new album “Palo Santo”, this marks their first Asian Tour and tickets for their Manila gig will be available starting Thursday November 22 at 10am via TicketNet Outlets; https://www.ticketnet.com.ph or call (02) 911-5555.