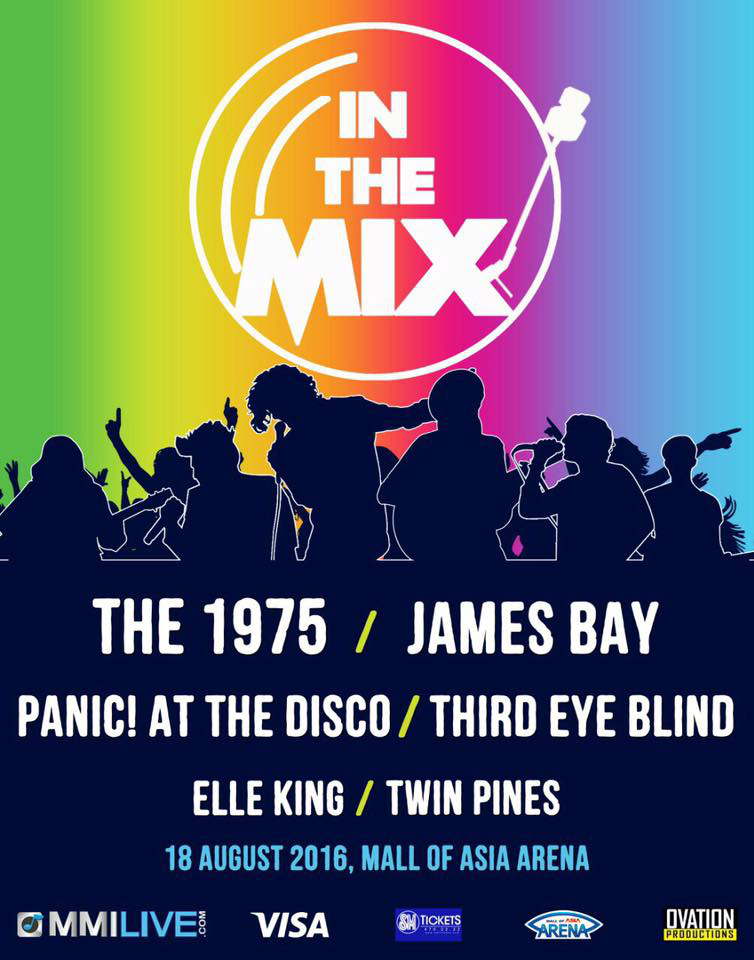 Panic! At The Disco, James Bay, Elle King, and Twin Pines on August 18 at the MOA Arena!

MMI Live and Ovation Productions are bringing in six international acts — The 1975, Third Eye Blind, Panic! at The Disco, James Bay, Elle King, and Twin Pines—to perform in one epic night dubbed as “In The Mix”.

As one of 2016’s most-awaited music festivals, ‘In the Mix’ will feature live performances from both popular and emerging artists on August 18, 2016 at the Mall of Asia Arena.

Returning to the country as promised at their Manila gig in 2015, The 1975 will be back with new materials and daring new sound with the sophomore album ‘I Like It When You Sleep For You Are So Beautiful Yet So Unaware Of It’, soared to the #1 spot on Billboard’s Top 200 Chart and produced the hit singles like “Love Me”, “Ugh!”, “The Sound”, and “Somebody Else”. The album was out early this year — a follow-up from their 2013 debut ‘The 1975.’ The Manchester synth-rock band was responsible of producing hits like “Chocolate”, “Girls”, and “Sex” to name a few.

Alternative-rock band Third Eye Blind will also make their way back to the Philippines. Led by the hits “Semi-Charmed Life,” “Graduate,” “How’s It Going to Be,” “Losing a Whole Year,” and “Jumper,” Third Eye Blind found commercial success in the late 1990s. Their self-titled debut album Third Eye Blind reached number 25 on the Billboard 200 chart, sold six million copies and went six times platinum in the United States.  “Semi-Charmed Life” peaked at No. 4 on the Billboard Hot 100 and earned the group a Billboard Music Award for modern rock track of the year.

After their first visit in 2008, Grammy-nominated Panic! At The Disco is also returning with the recently released fifth studio album, ‘Death of a Bachelor.’ Ten years after, the award-winning rock band’s sole remaining founding member Brendon Urie describes their fifth LP as “a mix between Sinatra and Queen” which he written alongside the likes of Ricky Wilson and Weezer’s Rivers Cuomo.

Among the newcomers is 2016 Grammy’s Best New Artist nominee James Bay, who is also set to perform his collection of dusty, blues-inspired songs from his debut ‘Chaos and the Calm.’ With his notable singles “Let It Go” and “Hold Back The River,” James also nabbed Grammy nominations for ‘Best Rock Album’ and ‘Best Rock Song’ for his track ‘Hold Back the River.’

The American singer-songwriter Elle King whose debut album ‘Love Stuff’ with the single “Ex’s and Oh’s,” has risen to the top rungs of the charts months after its 2014 release and on the Billboard Hot 100. The hit also made our 26-year-old music fest headliner just the second woman in two decades (after Lorde) to top the Alternative Songs list and the only woman to lead Hot Rock Songs in 2015.

Hailing from Glasgow, frontman Barry Morrell, drummer Graham Brown, and bassist Callum McConville are a three-piece anthemic indie band known as Twin Pines– a homage to the mall in their favourite film “Back to the Future”. With a fresh and innovated sound their single “Young Heart” is scheduled for release this May. The track has already featured on E4 hit show ‘Made In Chelsea’ and has been one of the stand out tracks during the band’s recent live performances.

90s Faves, TLC and SWV, To Perform LIVE In Manila This November!