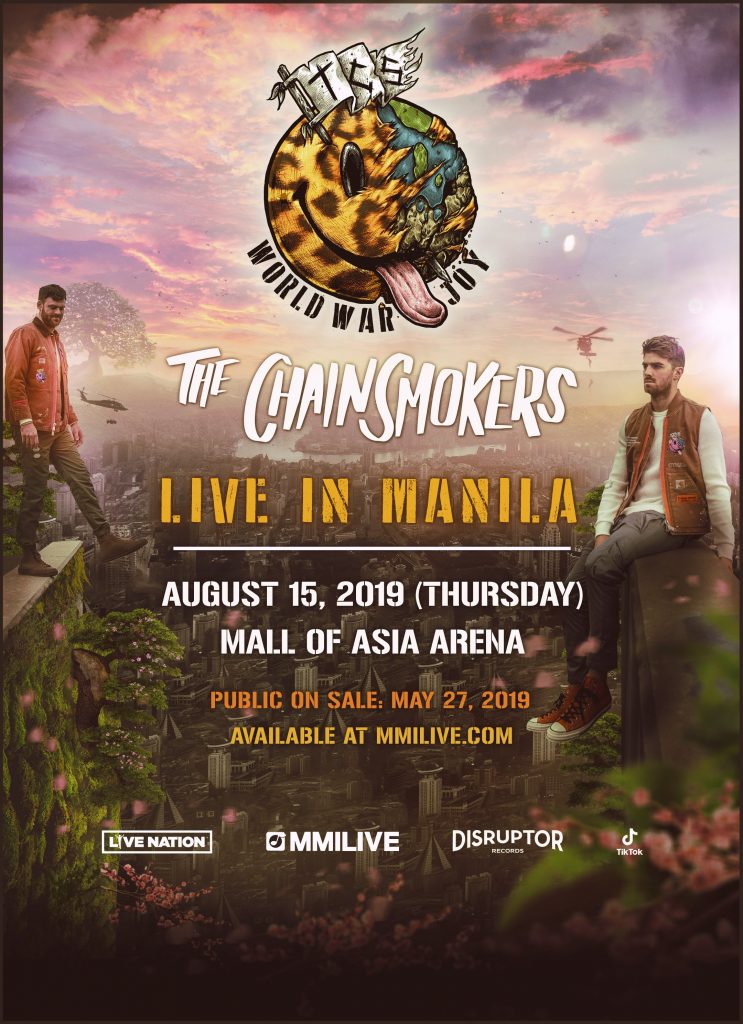 Grammy award-winning and Billboard chart-topping duo, The Chainsmokers, will bring their highly-anticipated World War Joy Asia Tour to Manila on August 15, 2019 (Thursday) at the Mall of Asia Arena as announced by concert promoters MMI Live and Live Nation.

The duo took the social media to share the news of the World War Joy Asia Tour, which will make stops in more than seven cities around the region including Tokyo, Bangkok, Singapore, Hong Kong, Seoul, Taipei and Shanghai.

Tickets for The Chainsmokers World War Joy Asia Tour will go on sale to the general public starting May 27, 2019 (Monday) at 10am through www.universe.com/mmilive.

The tour announcement comes on the heels of the duo’s latest tracks “Kills You Slowly” and “Who Do You Love” featuring 5 Seconds of Summer from their new album “World War Joy”. Released in February this year via Disruptor Records/ Columbia Records, “Who Do You Love” immediately shot to No. 1 on iTunes and has already accumulated nearly 14 million combined global streams to date. Additionally, the track was added to Spotify’s New Music Friday playlist in 37 countries, added to their largest playlist Today’s Top Hits and added to Today’s Hits on Apple Music.

Comprised of Alex Pall and Drew Taggart, the duo have evolved into a dominating musical force with a diverse repertoire of songs that have led them to become one of music’s hottest recording acts. Their signature sound deftly reaches across indie, progressive, and pop realms.

The duo’s evolution as producers and as songwriters has seen them develop some of the biggest breakthrough songs over the course of the last few years. In 2016, the duo catapulted to worldwide stardom with three certified Multi-Platinum hits. “Roses” featuring Rozes, from their Gold certified debut EP, “Bouquet”, was a 4X Platinum smash that shot to #1 on Billboard’s Top Dance/ Electronic Albums chart. “Don’t Let Me Down” featuring Daya, included on the duo’s second Platinum selling EP titled “Collage”, went 4X Platinum and was a top 5 Billboard Hot 100 hit. The duo won the “Best Dance Recording” Grammy for the track at the 2017 Grammy Awards.

In April 2017, the duo released their Platinum certified debut album titled “Memories…Do Not Open” and embarked on their highly successful 40-city “Memories…Do Not Open” arena tour. The album debuted at #1 in the U.S. on the Billboard 200 chart and produced Multi-Platinum certified smash hits “Paris” and “Something Just Like This” featuring Coldplay, of which the latter earned the group a 2018 Grammy nomination for “Best Pop Duo/Group Performance”.

The duo will maintain their extended Wynn Nightlife Residency in Las Vegas and will continue releasing music and touring across the globe throughout 2019.